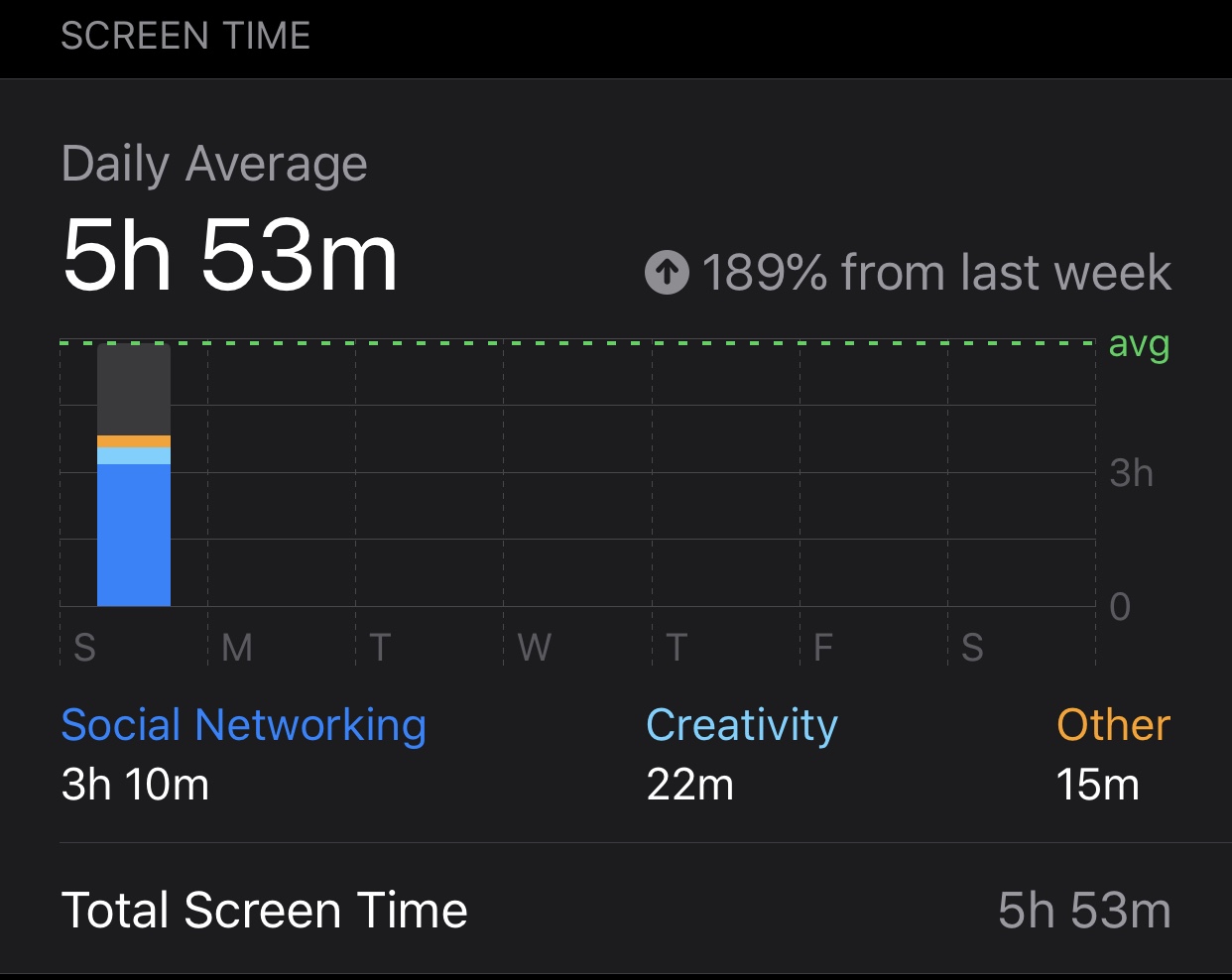 One Day of Web Interactions

In today’s day in age, social media, technology, and media use in general is at the forefront of everyone’s minds. Especially those of my generation… Being 18 years old and living in 2020 comes with many perks, but many areas in which folks of older generations would question my actions, and quite frankly my sanity as well.

So, I tracked my digital media use for one day. Just one. I was slightly shocked to find how deeply rooted my reliance on technology goes but not all that surprised.

I began my day around 10:45 and immediately checked my phone to see the time. Then, I checked snapchat to see which of the homies from my hall were getting breakfast and when. I realized I was too late to the group chat and they had gone without me. This right here, is a prime example of my reliance on my phone. It serves as my communication with others from my hall since I’m apparently too lazy to go and knock on someone’s door.

Around 11, I started scrolling on instagram and viewing people’s stories. I saw one that you could say captured my attention. I also noticed some misleading hashtags for a prolife instagram account. The account is dedicated to the ProLife movement and as of recently, the “Black Preborn Lives Matter” movement. I scrolled through the account for probably 20 minutes and sent some of the posts to my friends to get their input on it.

From 12 to 12:15 I talked to my brother on the phone for 10 mins then caught up with a friend from home over text. Then around 12:20 I checked Instagram, once again. I took a break from my phone to clean my dorm room and then picked it up again around 1:30 to play some music while I showered. Yes, I listen to music in the shower. It makes it go by faster. Or maybe I’m just that addicted to my phone that I need it with me at all times.

After I showered and cleaned up, I went on Snapchat, Instagram, and Tiktok for 20/25 minutes and then read a magazine article online.

From 2:50-4 I did homework using my laptop, which included reading multiple posts from the New York Times and Washington Post that focused on social media use in politics which I thought were pretty interesting. I also used my laptop for music while I did work.

Around 4:05, I got a facetime call from a friend at home and talked to him until 6. One pro of technology use is a feel of “in-person” talking even when you are hundreds of miles apart. If it weren’t for Facetime, I would rarely get to have that experience.

At 4:59, I got a Life360 notification, an app that my friend group uses to keep track of each other in case anything were to go wrong. The notification read that a friend of mine’s phone was at 3%, and that I should warn them to charge it. I got a bit of deja-vu from the Arkangel episode of Black Mirror in which the mom obsessively tracks her daughter’s whereabouts, actions, and health. Like the mom in Arkangel, my friend group downloaded the app so we know where we are if one were to not respond. However, recently apps like this have gone to extremes like tracking driving speed, whereabouts, exact locations with time stamps, and even battery percentages. Creepy or crazy? Maybe a bit of both.

After talking on facetime until 6, I didn’t return to my phone besides casually checking my notifications until 10. I went to see a movie with some friends at the theatre from 7-around 10.

Returning back to my dorm room, I completed my homework on my laptop until 11 ish. Then I watched an episode of Lost on Hulu, checked Instagram and responded to snapchats before turning my alarm on for the morning and heading to bed.

I spent around 6 hours on my phone. 6. Hours. Thats a little less than how I long I sleep every night. 3 of those hours were spent on social media, 2 on Facetime, and some searching the web and responding to texts. I averaged 251 pick ups. Meaning, I checked my notifications over 200 times today. I got around 355 notifications as well.

That seems a bit insane to admit, but I am reliant on my phone after all. While there are many pros such as communicating with friends and family at home, there are plenty of cons. I have a reliance on my phone and check it constantly. I also crossed some false information on the internet today. The New York Times article that I read said it best: “we receive stories from news outlets, but that have been shared — and deemed credible by — friends and family. And we respond quickly, reacting to mediated information and sharing it as our own”.

Media, however fun and entertaining it is, has made us attached to our phones, our laptops, and even our TVs. I hope to take a step back, or even just decrease my screentime, and focus more on whats really in front of me. (Not a screen…)

This may be a good place to introduce yourself and your site or include some credits.